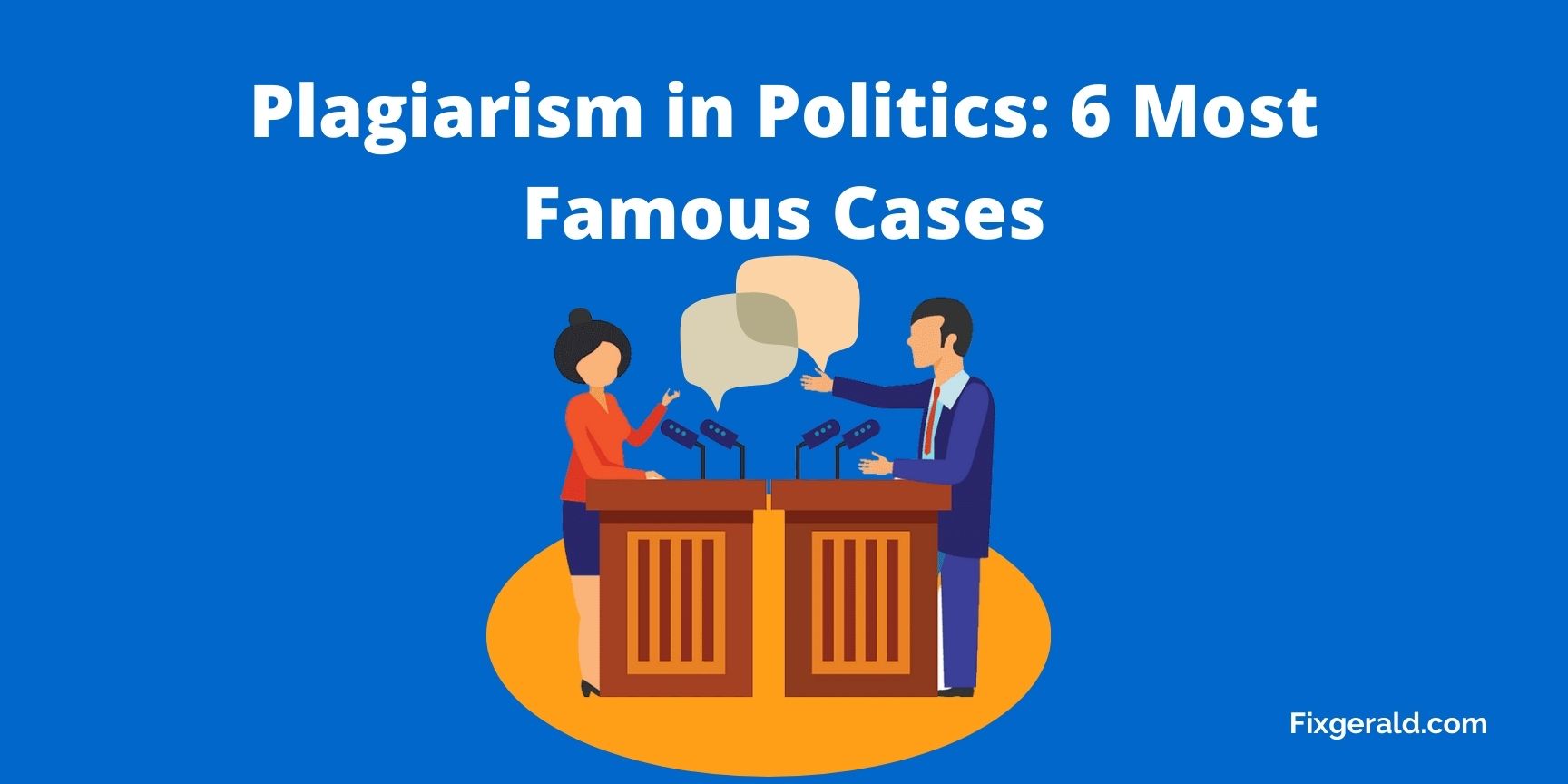 In this article, you’ll learn more about plagiarism in politics and the most significant cases of political copying that happened over the last several years.

Plagiarism can be defined as representing someone else’s ideas, expressions, and thoughts as one’s own. In other words, it can simply be defined as theft. So, it’s understandable why plagiarism is considered the ultimate violation of academic integrity. Although copying one’s thoughts is a serious crime in any instance, it reaches a whole new level when important political figures plagiarize someone’s ideas and use them in their works.

Why Plagiarism in Politics Matters

While many political figures accuse their ideological opponents of plagiarism just to increase their chances of winning, the act of stealing someone else’s ideas and expressions has a much more significant impact on the general public.

A speech represents a politician who stands behind it, which is why people take them very seriously.

Besides speeches, the politician’s education, background, and qualifications for the position play a significant role. So, finding plagiarized content in a speech indicates fraudulent activity and ruins the built trust of the people. But, previous mistakes can harm politicians’ reputations even decades after they take place.

For example, Ph.D. dissertations and other crucial works that are most likely responsible for the politician’s success can also contain plagiarized content, after which politicians often get their degrees revoked, so they’re forced to resign.

But Why Does Plagiarism in Politics Matter So Much?

Politicians are people with great responsibility, regardless of how popular they are. People choose certain politicians because they introduced good ideas, which earned them the public’s trust.

If an act of plagiarism is revealed, a politician is dishonest and fraudulent. After all, it means the politician claimed credit for the work they don’t deserve. Whether the copying occurred recently or 20 years ago, someone who willingly violates the ethical standards to advance a career becomes highly suspicious.

This questions all the activities and ideas a politician stands for. If they’re dishonest about the source of their thoughts, they’re probably dishonest about numerous other things.

Once the politicians are found guilty of plagiarising, they face an inevitable downfall. The public highly criticizes them, and their reputation is forever tarnished. As a result, they’re often forced to resign and step down from politics altogether.

It’s essential to avoid plagiarism in every situation, especially in political activities, as the benefits never outweigh the drawbacks.

Now, since you’re familiar with what copying stands for in politics, let’s jump into some of the most famous examples of plagiarism in politics that have happened lately.

This isn’t the first time Joe Biden used appropriation. In 1987, Biden copied a part of Neil Kinnock’s speech, who was the UK Labour leader.  But, none of these instances prevented Joe Biden from becoming the 46th US President.

Winning reelection in 2017, the UK Labour MP Kate Osamor delivered a speech that closely resembled Barack Obama’s speech in Chicago after a win. The public quickly connected the two winning speeches and accused Osamor of plagiarism.

Osamor tried to save her reputation by saying the speech she used as inspiration didn’t need any introduction, but the public was still widely unhappy with the response.

Melania Trump, the wife of the 45th US President Donald Trump and the former First Lady of the US, plagiarized a part of a speech given by Michelle Obama in 2008. Melania Trump used plagiarized content in her 2016 Republican National Convention speech.

The public quickly noticed this case of plagiarism, and people across the entire US demanded answers. The former President and First Lady didn’t try to resolve the matter, as Donald Trump simply stated that his wife used common phrases that aren’t considered copying. The scandalous event is remembered to this day as one of the biggest cases in the recent history of plagiarism.

Ben Carson, a former candidate for the 2016 Presidential Campaign, was accused of using plagiarized content in his book America the Beautiful, published in 2006. He used several sources without giving them any citation and credit. Although Carson admitted his mistake of missing some sources, maybe his success in the 2016 Presidential Campaign would be bigger if the incident didn’t occur.

This is just one instance of how old mistakes can affect politicians’ futures decades after.

John Walsh, the then appointed senator of Montana, tried to use different methods of gaining a full-term position in the office during the 2014 elections, but he couldn’t predict what would happen.

Unfortunately for him, this is when he became involved in a plagiarism scandal as The New York Times claimed John Walsh used plagiarized content in his Master’s dissertation work. This wasn’t two sentences or two paragraphs, as a total of 75% of the entire thesis was found to be copy-pasted text. There weren’t any citations added.

John Walsh was immediately disqualified from the presidential race.

Rand Paul, a US senator and another candidate for the 2016 Presidential Campaign, was the main topic of a 2013 plagiarism case.

Even though Paul admitted his mistake and highlighted the importance of properly citing sources, these two plagiarism instances forever ruined his political career. People today view him as someone ready to use illegal strategies to gain more power.

Whether appropriation activities happened recently or in the past, politicians can pay a high price for their mistakes. Thanks to advanced tools everyone has at their disposal today, people can check plagiarism levels of every spoken or written text.

Ultimately, it’s crucial to avoid following the examples of plagiarism in politics at all costs. Our tool is here to provide you with the best services for avoiding copying. Not only will we detect plagiarized texts, but we will also assist you in transforming the text so that it becomes 100% original.

Read our short article to find out how much plagiarism is allowed in academic work before it gets you in trouble!

Every piece of art is inspired by another, but some influences are much too obvious to pass off as “inspiration.”

Plagiarism Cases and Statistics Plagiarism in Journalism and Media with Examples

The purpose of this article is to explain plagiarism encountered in journalism by explaining the phenomenon with examples and reasoning.