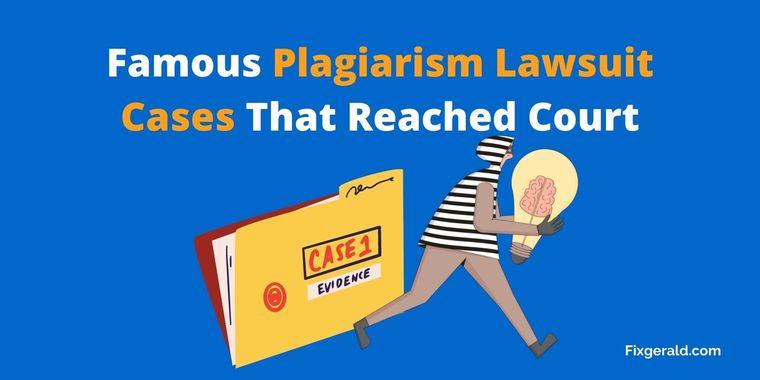 The purpose of this text is to explain illegal copying of other people’s words and ideas and list the nine most famous plagiarism lawsuit cases.

What Is A Plagiarism Lawsuit Case?

When we say that we have a case of plagiarism, we mean that a particular person used another individual’s intellectual property like research, text, or idea and presented them as their own. Naturally, the person who plagiarizes doesn’t give any credit to the rightful owner.

Such cases can happen in different spheres of education and culture, such as writing and poetry, music, cinematography, scientific research, etc. Sometimes, there are even plagiarism cases where a country plagiarizes a national flag or another country’s national anthem.

Numerous countries have strict policies and laws on illegal copying in their legislative systems, so some cases become plagiarism lawsuit cases. After the plagiarism court case ends, the person who plagiarized has to bear a particular punishment.

These consequences will depend on the type of appropriation in question, the volume of plagiarized content, the country’s attitude towards borrowings and originality, and the status of the “author.” Copying among undergraduates can lead to a serious warning or a notice.

Sometimes, a student may get expelled, but plagiarism in dissertation theses or government officials’ speeches may lead to severe consequences such as dismissal from the designated position or a bad reputation.

In line with this, when a famous person gets accused of plagiarism, the case will usually end in a lawsuit and reach court. The consequences of such cases can lead to the destruction of careers and lives. For example, in cases that involve famous writers, politicians, compositors, artists, and filmmakers.

A lot of celebrities were involved in appropriation that ended in a scandal. Some cases are so high-profile that they are interesting for each individual who digs a little deeper into plagiarism. Let’s see the nine most famous examples of such cases of “borrowing”.

What is your Originality Index?

Check your text with a plagiarism checker to stay safe

Here’s a list of nine famous copying cases where each incident was reached and resolved in court. You’ll also be able to see what the plagiarism consequences in such cases can be.

Marvin Gaye’s children accused the duo that created the song “Blurred Lines” in 2013 of plagiarism. The children claimed that the duo copied parts for “Blurred Lines” from Gaye’s original “Got to Give Up.” They requested an astounding $7.3 million.

The members of the duo, Robin Thicke and Pharell Williams, admitted that there were certain similarities between the two songs but stated that those were coincidental rather than a case of plagiarizing. Whatever the case, $7.3 million is a lot of money to pay for a coincidence.

Taylor Swift’s case is one of the most ridiculous ones in the history of music. She was accused of allegedly plagiarizing the lyrics of Jesse Brahan, an R&B singer. He accuses Swift of using parts from his song called “Haters Gonna Hate” in her hit “Shake it Off.”

For this coincidence, Braham wanted Swift to pay the enormous $42 million. However, after numerous reviews, the board concluded that some phrases in the song were not the case of stolen intellectual property and are often used in rhyme. The case was a ridiculous attempt to make money.

Senator Joe Biden was accused of plagiarism, proclaimed guilty, and forced to remove himself from the 1988 presidential election campaign. He admitted that he plagiarized his text from an introductory methodology class and failed to provide the right citations.

The case reached the Delaware Supreme Court, where the court dismissed all allegations. However, Biden was again accused of appropriation later in his career. This time, copying was detected in his public speech where he didn’t give credit to Senator Kennedy. Because of that, the court removed Biden from the Presidential Campaign.

Karl-Theodor Zu Guttenberg was the German Minister of Defense and was accused of copying the greater part of his doctoral dissertation. When an analytical review took place, it was apparent that he plagiarized 63% of his work without giving credits. He was removed from his position instantly and lost his Doctoral title.

After all this information came to light, the university revoked Annette’s doctoral dissertation and permanently removed Schavan from the minister of education and research position. If the University of Dusseldorf hadn’t performed a check for plagiarism, the issue would never have been discovered and resolved.

Victor Ponta, the Romanian Prime Minister, was accused of plagiarism regarding his Ph.D. thesis, where, according to reviews, 27% of the thesis was an account of copy-paste. Ponta denied all accusations and said that his political enemies wanted to crush him.

However, later on, Victor admitted that some parts of his doctoral dissertation were a case of copied content. The most surprising moment of this case of plagiarism was the Ministry of Education’s reaction. They disapproved of the allegations, took back the claim, and dissolved the committee working on the case.

However, he mentioned that this type of plagiarism was never intentional. Because he came clean in this case, feeling shame, he resigned from the position as the content editor of Florida Times.

A content editor at New York Times, Jayson Blair, went an extra mile than Florida Times’ Lloyd Brown. He was engaged in intellectual fraud daily, and what’s even worse, he did it intentionally. When the investigators reviewed his work, they discovered counterfeit info, photos, facts, etc.

The board of editors at the New York Times characterized this issue due to bad coordination among the paper’s staff. In any case, this unqualified content that entered the NYT was colossal damage to the company.

According to a news portal in Hungary, Zsolt Semjen, a Hungarian Deputy Prime Minister, plagiarized around 40% of his Ph.D. thesis. He didn’t cite any of the content he plagiarized. However, the university where he received his doctoral degree couldn’t decide upon the original authors of the content Semjen plagiarized and attribute it to them.

As academic individuals, we can all do our part and help prevent plagiarism. First and foremost, it’s essential to keep notes and track all references citing the original authors. When a sentence is used word-for-word from another source, quotation marks are a must.

Most importantly, when we write essays, any thesis, or a Ph.D. work, it’s vital to make sure that we never copy-paste any material from other authors and always check for plagiarism before submitting your final work. We should always focus on making original arguments, and the cited statements from others can only help support our claims.