In this article, we describe what is accidental plagiarism, situations when it can occur, and some effective ways to detect it and avoid it in your future writings. 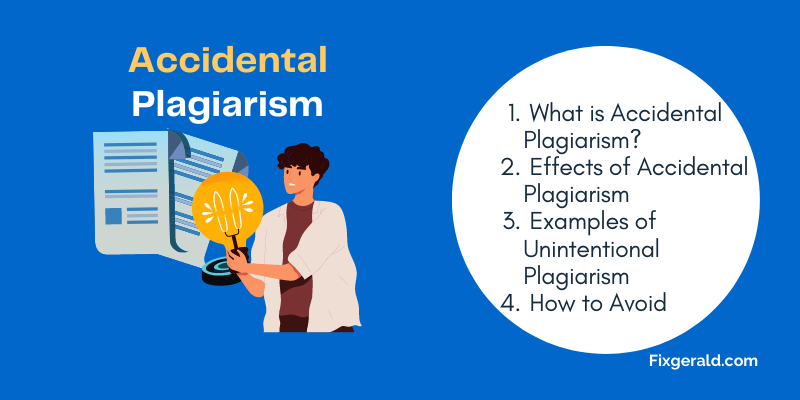 If you’re someone who does a lot of writing, accidental plagiarism is something you’ve surely crossed paths with already. Nowadays, unintentional plagiarism becomes more and more widespread. With so many texts already published and a number of them going live every day, it’s almost impossible to create a unique work from the first try.

Dealing with plagiarism all the time can be time-consuming, exhausting, and frustrating. Luckily, there’s a solution to this issue. Thanks to several useful tips and tricks, you can significantly decrease the amount of plagiarized content in your text. Specifically designed detectors and online tools can further ensure your work is 100% original.

Check out this article to find out how!

What is Accidental Plagiarism?

First things first, it’s essential to know what it means when you use someone’s words accidentally.

If you’re in the writing world, you’re surely familiar with what plagiarism means. To put it simply, it’s an act of copying or stealing someone else’s words and using them as your own without acknowledging or giving credit to the original author. As an act of fraud, copying is a serious issue that can seriously harm your education, career, and reputation in general.

Still, plagiarism isn’t that simple, and a lot more goes into what makes it a delicate and complex topic. Although the act of copying other author’s words and ideas seems to be clearly defined, what happens if a copying act is done without any intention? In other words, what is accidental plagiarism?

As human beings, we can’t eliminate the factor of making mistakes. No matter how hard we work and how much time we dedicate to a text, making a mistake every so often is completely natural and expected. This includes unintentional plagiarism as well.

Namely, there is a lot of content circling the internet. A countless number of published books, blogs, and articles isn’t helping either. With so much information available online, it’s more challenging to create an original article than to accidentally plagiarize content that already exists.

This is especially common among inexperienced writers who aren’t aware of the basic writing rules or how to follow them. Accidental plagiarism can also be a result of inaccurate citations and improper proofreading.

So, if you happen to copy someone else’s words but you forget to insert quotation marks, that could be defined as accidental plagiarism. But, since it’s next to impossible to determine whether someone made a mistake on accident or purpose, it’s that much harder to come up with the ideal accidental plagiarism definition that covers all its aspects.

One way of gaining a deeper understanding of unintentional plagiarism is to say more about its effects. Even though it constitutes as accidental, this kind of borrowing can have serious consequences too, academically, legally, and professionally.

Most individuals first become aware of borrowed text during their education. Because of that, accidental plagiarism can have a significant toll on someone’s academic success. This is also when most students first become familiar with the negative effects of copying, whether it’s accidental or not.

As inexperienced writers who don’t understand how serious and harmful plagiarism can be, students often use someone else’s words without giving them the proper credit. Although the same students learn about the importance of creating original work during higher education, it’s still possible to accidentally plagiarize the content by failing to use the proper formatting methods.

While these are all academic mistakes that are corrected throughout education, there still are some academic consequences. For instance, students typically face lower grades and various disciplinary actions. In more serious cases, accidental plagiarism can even lead to suspension.

Every published work requires a lot of effort, time, knowledge, and skill, not only from the author but also from the entire publishing team. Therefore, all published material is copyrighted. By copyrighting the publications, authors prevent their original content from being stolen.

People using someone else’s work for their purposes must give credit where credit is due. Otherwise, they could face serious legal consequences. As copyrighted material that belongs to someone else, plagiarizing can be understood as an act of theft.

While most unintentional plagiarism cases face monetary compensation for their writers’ negligence and lack of attention to detail, some more serious cases can even lead to judicial trials.

Finally, accidental plagiarism can also have a significant effect on someone’s career and professional life. Professionals who are caught copying someone’s work without giving them the much-needed credit tend to face strict professional consequences.

Being dismissed from the project and getting fired are just the first steps. People who plagiarize content even unintentionally can ruin their reputation and significantly reduce their future job opportunities.

With so many cases of professionals getting caught plagiarizing and ultimately ruining their careers, it’s crucial to be aware of all the possible consequences before turning in your final version of a written project.

In addition to various types of plagiarism already existing, accidental copying can take multiple shapes and forms. Here you can find the most common examples of unintentional plagiarism. Use them as pointers of where you need to pay extra attention when proofreading all your future works.

When you’re working on a project, the key to writing an original work is effective paraphrasing. This means you’ll take the necessary time to understand the material, grasp the main idea, and explain it using your own words.

If you don’t understand the topic or don’t dedicate enough time to it, it’s most likely you’ll end up with ineffective paraphrasing. You’ll try to shorten the text, but you’ll end up using the same language and identical phrases. As a result, your work will be an example of plagiarism.

Sources have several important tasks, and one of them is to protect writers and their original works. If you fail to include a list of sources you used or referred to, your original work can also be seen as an example of plagiarism.

Because most writers simply forget to mention the list of sources at the end of their work, this is often seen as a form of accidental plagiarism.

Improper citing is probably the most common form of unintentional plagiarism. If you don’t proofread your written work or pay close attention to details, you’ll easily miss the improper citing techniques present in your work.

Due to tight deadlines and other professional obligations, this is something many writers deal with even daily.

How to Avoid Accidental Plagiarism

Now, since you know more about unintentional copying, let’s mention some of the best strategies to resolve this recurring issue. In this part, you can learn to avoid accidental plagiarism by implementing several valuable tips and tricks into your writing routine.

Even though you think you’ll remember where each paragraph belongs, you’ll quickly get lost in the pool of different books and sources of information. So, once you decide on using a particular part of the text from a different author, make sure to include a source immediately. That way, you won’t mix up your sources or forget to cite them.

Quotation marks can make or break the quality of your work and your entire professional reputation. When you’re copying parts of text from the source and pasting them in your document, you should put those quotation marks straight away. This will eliminate any chance of improper quotation and forgetting to quote the original text. Your proofreading part will be much easier too.

When you’re working on a project, it’s crucial to understand what you’re writing about. This is the only way you’ll be able to find the best word choices and sentence structures that’ll say the same thing, just in a different way. Effective paraphrasing skills require some practice, so don’t give up!

Even if you implement all of the abovementioned strategies, using a plagiarism checker is your safe ticket to creating plagiarism-free writings.

Even when you’re confident your work is entirely original, there’s no harm in running your text through a plagiarism checker and ensuring everything’s in order before your text goes public. This step will eliminate even the accidental plagiarism examples you probably weren’t aware of.

Detect plagiarism and grammar mistakes in your text

While you can work hard to remove any signs of plagiarism in your texts, some examples of accidental plagiarism will show up occasionally. Because they can have academic, legal, and professional consequences, it’s best to implement various methods to eliminate them.

By using a plagiarism checker, you’ll detect any unintentional plagiarism occurrences on time, which will allow you to fix the mistakes and make your text look flawless before it reaches other people.

Academic Plagiarism Learn About Plagiarism in Research and Tips Avoid It

The purpose of this guide is to explain plagiarism in research writing and explore the methods of avoiding it.

About Plagiarism The Guide to Understanding Global Plagiarism

Our guide will help you to prevent and understand the definition and peculiarities of the global plagiarism problems in writing.

Plagiarism Cases and Statistics Cite Them All. The Most Cited Books, Movies and Songs of All

Plagiarism in any sphere of life and art is bad. But a well-formed quotation can not only add value and weight to the one who uses it, but also show the importance of the original work. Constantly working with plagiarism, we were interested in which sources are cited the most.