This article shows the trends in the most famous music plagiarism cases. This is a data supported study.

In 2017, over 200 artists signed an open letter that stated, “The verdict, in this case, threatens to punish songwriters for creating new music that is inspired by prior works. All music shares inspiration from prior musical works, especially within a particular musical genre.”

This came after the Blurred Lines lawsuit of 2015, when Robin Thicke ended up paying $5.3 million for plagiarizing Marvin Gaye’s track, Got to Give it Up.

Plagiarism in music has a lot of different opinions, and nobody can quite decide what should count as inspiration and what should be labeled a rip-off. We at FixGerald aim to help writers and creatives avoid these issues where writing is concerned because plagiarism seems to be a common problem in most creative fields.

To understand the implications of plagiarism, we decided to study the most well-known cases of plagiarism in the music industry and analyze their success, or in some cases, failure.

We studied 237 cases of plagiarism in music and compared their YouTube view counts: originals versus plagiarized tracks. To avoid wrongful accusations, we have picked cases that were studied, settled, and proven to have been plagiarized.

We also studied public data about the settle price of these cases to find the most expensive ones.

All the numbers mentioned in the study were collected, validated and analyzed on Jan 28 2022.

Plagiarized Songs Tend Get More Popular than the Original Ones

Many of pop culture’s favorite tracks have elements plagiarized from influences that weren’t as popular—case in point, Bruno Mars and Mark Robinsons’ Uptown Funk. The track sounds too much like The Gap Band’s Oops Upside Your Head. The original song has 7.1 million views on YouTube, while the plagiarized song has a staggering 4.4 billion views.

Here are some other famous examples of plagiarized songs in pop culture that have gone on to see more success than their original versions: 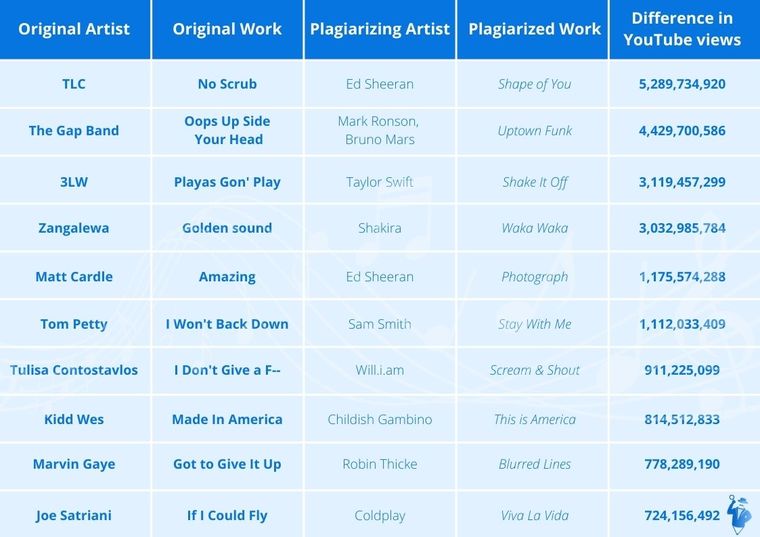 Based on the sample of 237 cases, it turns out that plagiarized songs get 211.3 times the views of their original counterparts on average.

If we consider the fact that every 1,000 views on YouTube equals at least $2 on average, settlements for a plagiarism lawsuit should be racking up millions.

Other times, they might get a credit, like in the case of Ed Sheeran’s Shape of You, where writers of TLC’s Scrubs got a writing credit for Sheeran’s song or even royalty compensation to get a certain % of the profits from the plagiarized songs.

Many of the world’s favorite artists have faced the wrath of lawsuits. Led Zeppelin is no stranger to them, with 6 already under his belt for plagiarizing Whole Lotta Love, Babe, I’m Gonna Leave You, and I Can’t Quit You, Baby. Similarly, Lauryn Hill has faced a lawsuit for 13 songs, Will.I.Am has met 5, and Bruno Mars and Oasis have had 3 each. 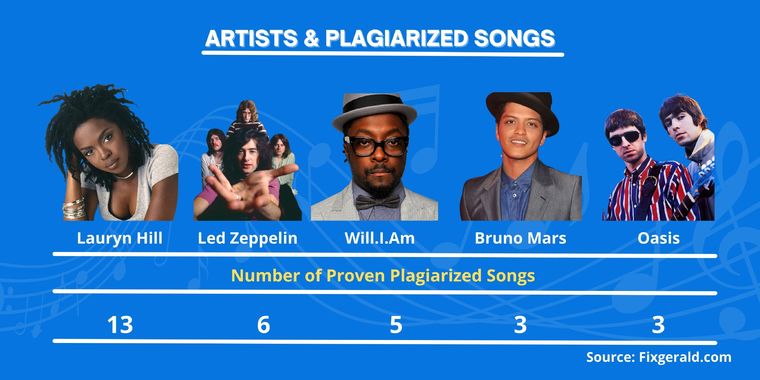 Even though many artists have settled for less than they deserve, many have taken the case to court to receive the settlements they deserve. Perhaps the largest we have on record is Robin Thicke’s $5.3 million to Marvin Gaye, but there are other large settlements worth noting. 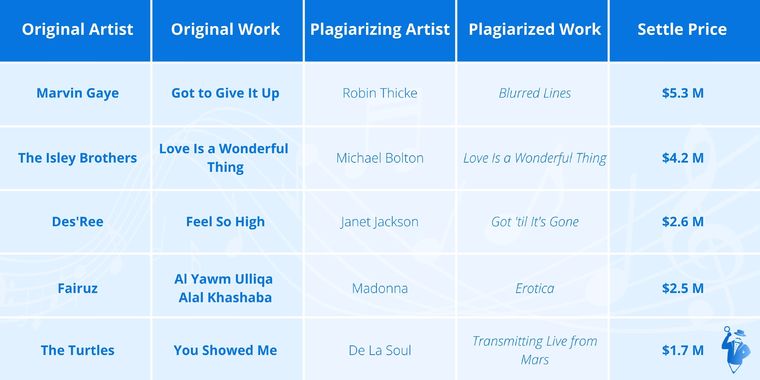 During our research, we also found that plagiarism can happen twice. Like in the case of Radiohead’s Creep, which was originally The Air That I Breathe, and Lana Del Rey’s copy of Creep became Get Free.

Interestingly, Creep received more views than the original The Air That I Breathe and the plagiarized Get Free.

So it seems not all copied songs go on to see wild success, either because they aren’t good or haven’t had the right kind of marketing and exposure.

Some of the ‘failed’ plagiarism cases YouTube wise include: 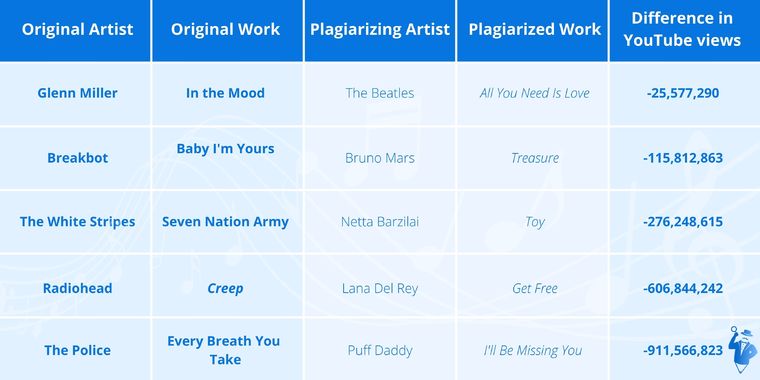 It’s easier to spot plagiarism in written work; you can use a plagiarism detector to compare it and judge for yourself. However, with music, it gets tricky; several elements go into making a song, and it’s not possible to isolate them by simply listening to them.

There are two things artists need if they want to file a lawsuit against another artist for plagiarism:

This means checking whether or not the plagiarizer had heard the music before writing their own.

This asks the question: “can the average listener tell?”. The more elements the two songs have in common, the greater the grounds for the lawsuit.

Music plagiarism lawsuits in the music industry have gone up, especially in the digital era. It has become easier to download tracks, strip them, and steal different elements to incorporate in another song.

A song comprises several instruments and goes through different processes, making it difficult for judges or jurors to spot any similarities. So, when a case like this is taken to court, a musicologist is called to strip the track down to make it easier to underscore the similarities between the two songs.

Recently, however, more and more plagiarism-checking software are cropping up that use A.I to detect similarities in music.

Maybe expecting all music to be 100% original is too much; any art form takes after the artist’s muses, inspirations, and influences. Therefore, it’s inevitable to find similarities between the two works of art.

However, it’s also essential we draw a line between inspiration and imitation. Contrary to popular belief, imitation is not the sincerest form of flattery… it simply opens you up to a lawsuit.