The purpose of this article is to discuss why plagiarism in music has increased recently and explain some ways to identify it.

Music plagiarism is when a musician or artist uses or closely imitates another author's music when representing their original work. It may occur either as a copied melody or motif or in the context of reusing the already recorded sound in a different song (also known as sampling). In the article below, we’ll try to explain why more music plagiarism cases appear nowadays and present you with a guide on identifying plagiarism in music. 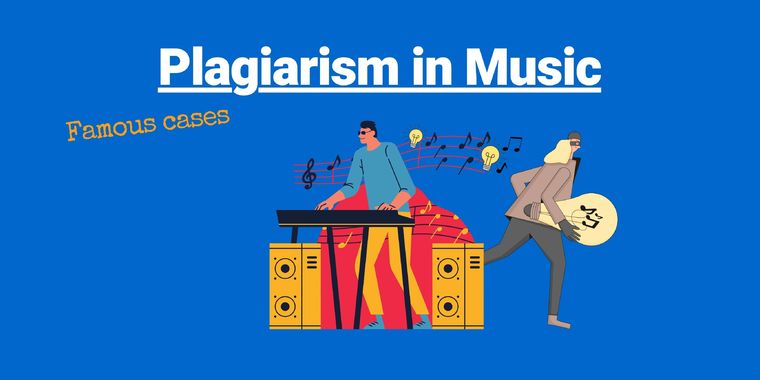 First of all, to say that a particular song is an example of copying, it must include one of the following instances:

All examples of plagiarism in music mentioned above may look harmless at first glance, but they are all significant occurrences of deliberate copying in the music industry. In the remainder of the text, we’ll try to get the idea of music plagiarism closer to your understanding.

We’ll delve into the notion of why more and more artists plagiarize in the music industry. Also, we’ll present you with some tips on how to identify plagiarism in the music industry yourself. Finally, at the end of the article, you’ll find a list of the seven most famous cases where music borrowing allegedly took place.

Why Has Plagiarism Increased in the Music Industry?

If we go back in time a little, we’ll reach a time when people couldn’t listen to whatever music they want online. The only way to listen to music was by buying plates, cassettes, and later — CDs. But with the advancement of digital media, listening to music online as well as uploading and downloading songs became possible.

Not only did it become possible for some, but it also became possible for all, and as a result piracy came into practice and gave rise to unauthorized usage of other people’s content without giving credit.

Naturally, this is how numerous cases of music plagiarism took place in the music industry at large. To create a unique song, one must go through a time-consuming process, have talent and artistic exploration. Most find this a daunting task and hurry to prosper through simply copying.

It’s important to understand what plagiarism vs. copyright infringement is. If someone notices the song is plagiarized, the creator can take legal action against the one who plagiarized their original because the law protects their rights to the original.

How to Identify Plagiarism in Music

As we’ve mentioned, the advancement of our technology made music more accessible and started the trend of plagiarism; not everything about its advancement is bad. One beneficial trait of technology made identifying copying in music possible in the following ways:

Of course, there are examples of unintentional copying, but more often, it’s deliberate. The listeners and plagiarism checkers should be enough to notice cases of copying. To further dig into how common plagiarism in music is, we’ll list some of the most popular cases.

How the Original Creator can Protect their Music Property

Actually, every song or melody created and recorded is protected by a form of intellectual property law that is called Copyright. It covers literary, dramatic, artistic, and musical works, architecture and computer software.

To protect a musical work, a musician can apply for a copyright for a composition, sound recording or an album containing several of them. Having a copyright means a person claims sole rights to the music and prevents others from copying the particular songs and its elements.

Though you can come across numerous examples of plagiarism in music with a bit more thorough research, we’ve chosen the seven most famous cases. From John Lennon, through The Strokes, to George Harrison, you may find some of the examples surprising.

There are, of course, numerous other instances of plagiarism in music you can find if you are interested in finding out more. The truth is, however, that plagiarism cases are common and usually deliberate. Luckily, there are ways we can detect them and report them.