Plagiarism in any sphere of life and art is bad. But a well-formed quotation can not only add value and weight to the one who uses it, but also show the importance of the original work. Constantly working with plagiarism, we were interested in which sources are cited the most.

In order to answer this question, we analyzed over 350,000 plagiarism checks through our software within the last two years which accumulated over 15 million words of text. This includes student essays, blog articles, and any pieces of text created by content creators. We calculated which authors appear most often and which of their quotes are the most popular.

We divided our research into 3 main groups: 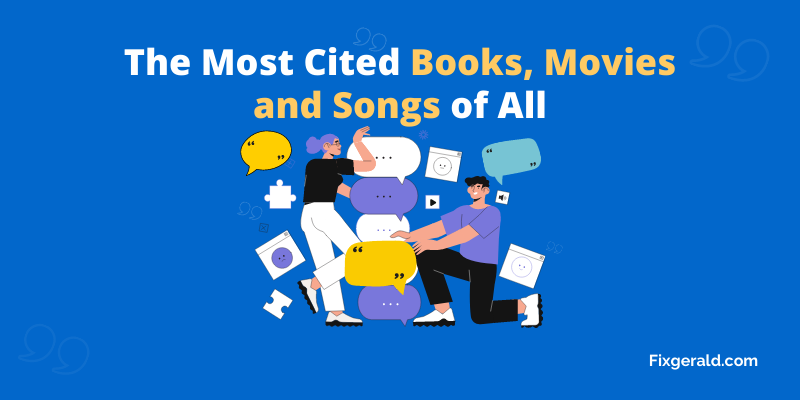 In order to calculate which movies are the most cited, we analyzed the most frequently repeated titles of works and chose those that are products of cinema among them. Among people in this field, we looked both at the actors and the phrases they said, and at the well-known directors and script-writers whose statements can be quoted.

Most Cited Actors and Directors

The words that we hear from our screens often sink deep into our hearts. But which actors have the most influence? Whose words do we remember and repeat, returning to beautiful phrases again and again? We counted which actors are most often quoted and took out their most famous phrases.

The most quoted actor is Tom Hanks. People quote both the actor himself and many characters that he managed to play during his career. Such phrases as ‘If it wasn't hard, everyone would do it. It's the hard that makes it great’ or 'Life was like a box of chocolates. You never know what you're gonna get' shows both Tom and his characters as smart and inspiring personalities. It’s no wonder he’s the most cited actor of all.

In addition to the actors and directors that people listen to the most, we wanted to know which specific movies or movie series are the most quoted. The list of the most cited films appeared as follows:

Many–especially Star Wars fans–may say that this did not come as a surprise to them. The phrase ‘May the force be with you’ has become so iconic that it is now found even in scientific works in no way related to cinema.

Another especially surprising title we did not expect to find here is WALL-E. Despite its apparent reticence, the film ranked ninth on the list of the most quoted. Another interesting fact is that it was ‘Eeeve’ (with its many possible spellings) that became the most common quote from WALL-E, surpassing the number of mentions and replicas of the hero of the title by 30%.

Spider-man is another one among the ‘one-quote movies’. It was Uncle Ben’s phrase ‘With great power, comes great responsibility’ that became iconic and one of the most quoted in the history of cinema. It covers over 90% of all the quotes from the movie.

In today's dynamic world, it was hardly possible not to mention TV shows. TV series culture has been taking its confident place along with full-length films for several years now. Not surprisingly, TV series are cited as much as books, and sometimes even more. 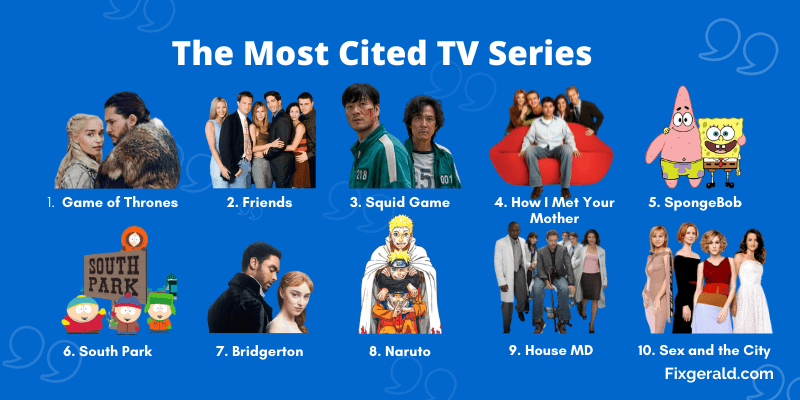 ‘Winter is coming.’ This phrase has become so commonplace that it can be found not only on the pages of student essays, but in ordinary life, even in those regions where winter is not noticeable climatically. The Dragons and White Walkers saga has become the most quoted TV series, not only due to winter, but also to its many other references.

Despite its recent release and the fact that Squid Game was not at all citable at the beginning of our study timeline, the series has confidently entered the top of the most quoted series. Such phrases as ‘I’m good at everything, except the things I can’t do’ or ’Good rain knows the best time to fall' will be remembered by the audience for a long time and will take their rightful place on the page of the most popular quotes for a long time to come.

We can see that there are many animated series among the popular and cited one, such as Spongebob, South Park or Naruto. Everyone's favorite heroes have found their place both in academic papers and many blog articles and posts.

Pages and Words that Stick to Mind

It would be impossible to talk about quotations and quoting without mentioning books. Here we are talking about both fiction and non-fiction. We looked at which authors, which books, and which genres people like to quote the most. Let's take a deep look at the results.

Obviously, scientific and professional works will very often fall among the cited books, especially if we are talking about citations in student works. We decided to divide these types of literature into different groups and consider them separately. The top most cited fiction books are as follows:

Full of motivating and inspiring quotes, it's no surprise that The Alchemist by Paulo Coelho has become the most cited book. Many mentions of it could be found, both in various blog articles, and in shorter pieces of text, which were probably intended as posts on social networks. ‘It’s the possibility of having a dream come true that makes life interesting’ and many other quotes made the book so popular.

Among the other most cited books, one can also recognize masterpieces of world literature. The plots of them are deeply embedded in our hearts, and the words are forever imprinted in our memory.

The list of most cited authors does not always match the most popular books. So many writers didn't make the top 10 with their books, but due to the number of works and the people who referred to them, they turned out to be the most cited writers in history. Their list looks like this:

Each of the books in the JK Rowling Harry Potter series was in the top 100 most cited books when we compared the results. Despite the fact that none of them could reach the top 10, together they put the writer in first place.

Almost the same applies to the famous classic William Shakespeare. Not all of his works made it into the top 100, but many of them are still quoted to this day.

Speaking about non-fiction literature, its references can be found in student works most of all, such as essays or research papers. Despite the fact that many of these books are more than a dozen years old, people continue to cite them as the most reliable and fundamental sources. List of the most cited non-fiction books:

We can see that there are works in various disciplines, from culture and sociology to mathematics and economics. Viktor Frankl's Man's Search for Meaning was the most cited book. Its references can be found most often when it comes to non-fiction.

I Hear It. I Quote It

Quotes of songs and musical artists are not something we meet so often. Musicians can be quoted as famous people, but their compositions appear as a reference only in individual cases when the lyrics are really good and make lots of sense. We wanted to find out which songs and artists are quoted most often.

If we talk specifically about musical compositions, then people will obviously look at the meaning and how the words of the song resonate in their hearts. Therefore, it is not surprising that these songs got into the top of the most quoted songs. Even looking at the titles, many of us can guess what phrases from their lyrics found shelter in the memory of the listeners. The top itself looks as follows:

The first place was taken by Shape of You by Ed Sheeran. The song became a hit and took top positions in many charts from its very release, and its video is one of the most viewed ones on YouTube. If we talk about the lyrics itself, from the very beginning of the song ‘The club isn't the best place to find a lover, so the bar is where I go,’ it was largely broken down into quotes. ‘I'm in love with the shape of you’ turned into yet another reliable way to tell someone ‘I love you.’

This category includes both statements and phrases spoken by the artist in everyday life, as well as fragments of songs written by them that could appear and be quoted from the lyrics. Speaking of musical bands, here we have summed up the number of quotes mentioned for each of the individual representatives of one band. So the Beatles included the words of each of the four separately, and all their lyrics. The list of top most quoted artists looks as follows:

We were very pleased to see performers of different genres and age categories in this list. Thanks to the variety of their songs, it was The Beatles who took first place at the top. ‘One thing you can't hide - is when you're crippled inside’ or ‘There's nowhere you can be that isn't where you're meant to be…’ one can find a quote for almost any occasion in life in their songs. The lyrics of The Beatles are very diverse and very easily find their place both in scientific papers and in more everyday texts or social networks.

Another interesting performer was Bob Marley. Often confused with Bobby McFerrin, the words ‘In every life we have some trouble. But when you worry, you make it double’ or ‘Don’t worry be happy’ are often accredited to Marley. Despite this, Bob Marley has a lot of his own masterpieces, which often turn out to be among quotes, such as Three Little Birds or No Woman No Cry.

We analyzed quotes in over 350,000 texts submitted to us for plagiarism check in 2020-2022. We then calculated which quotes and authors appear most often. Divided into 3 groups (movies, books, music) we determined the most cited sources in each category. All data collected by Fixgerald.com

Academic Plagiarism Learn About Plagiarism in Research and Tips Avoid It

The purpose of this guide is to explain plagiarism in research writing and explore the methods of avoiding it.

About Plagiarism The Guide to Understanding Global Plagiarism

Our guide will help you to prevent and understand the definition and peculiarities of the global plagiarism problems in writing.

This guide will help you learn how to prevent plagiarism and explore the tools that help keep your writing unique.