Not all forms of plagiarism are the same. People take different approaches to fake their academic achievements. Learning about these plagiarism methods can help you recognize when someone is dishonest.

You can also learn how to avoid doing it yourself. Our topic for the day is mosaic plagiarism. Most people have never heard of it, but the funny part is that many people have used it. Who knows, you might have done it without even being aware of it.

Let’s start from the beginning by explaining what it actually is. 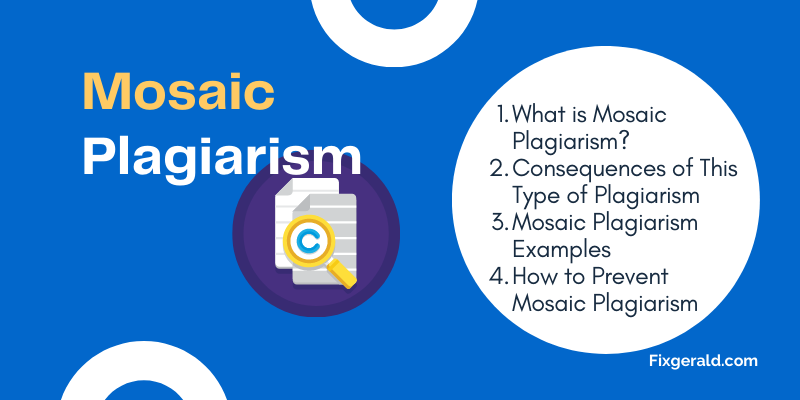 What is Mosaic Plagiarism?

Mosaic Plagiarism happens when writers borrow exact phrases from a source they are reading without using any quotation or rephrasing the statement. The writer keeps the whole structure like the original without making any changes.

It’s also referred to as “patchwriting” or “patchwork” plagiarism, and it’s considered wrong within academic circles. Even if the plagiariser uses source footnotes, it is regarded as a bad practice and is often penalized.

People who use this type of plagiarism often copy entire sentences and arrange them throughout the text in a different order.

This kind of plagiarism is pretty simple, and there aren’t many differences out there. There are only two approaches that differ in the number of sources used for copying ideas, texts, or thoughts.

Is it Patchwriting Plagiarism if I Use Someone Else’s Work but use the Right Quotation?

It all depends on how you cite the author and how the information is presented. Even if you cite your source but don’t clarify that this information isn’t yours, it’s considered mosaic copying.

On top of that, you should change the wording of the thought and, ideally, expand on it with some of your own conclusions. In the end, there is a fine line between citing someone to add depth and substance to your work and using mostly copied thoughts.

Consequences of This Type of Plagiarism

This type of offense is taken seriously within academic circles. In other words, no teacher or professor will go easy on a student who was dishonest. In general, there are no rules of punishment for this offense.

Each teacher will handle it individually according to their standards, and the educational institution will also sanction the student based on their own criteria. In some cases, a professor will reduce the student’s grade.

That’s the milder form of punishment. In other situations, they might end up being suspended and even expelled from college. However, what happens when someone is stealing outside of an educational institution?

Whenever someone copies other people’s work online, the site where the piece was published will get “flagged” by Google. Its rankings in searches will drop, which means that nobody will be able to find it in search results.

On the other hand, if an author finds out that someone has copied their work, they might pursue them in court, resulting in significant fines. Ultimately, people who copy someone else quickly lose their reputation and credibility.

In this example, the copycat doesn’t change any of the words from the original source or leave a citation:

“Science knows no country because knowledge belongs to humanity and is the torch which illuminates the world. Science is the highest personification of the nation because that nation will remain the first which carries the furthest the works of thought and intelligence.” – Louis Pasteur.

This example shows how a writer is borrowing a phrase from Pasteur without adding sources or mentioning that it’s not a part of the original text:

“We know how important science is and that without it, we wouldn’t be able to grow and develop. It’s what makes us human and sets us apart from all the other species.Science is the highest personification of the nation because that nation will remain the first which carries the furthest the works of thought and intelligence.”

“We know how important science is and that without it, we wouldn’t be able to grow and develop. It’s what makes us human and sets us apart from all the other species.Science is the ultimate personification of a country because it allows it to remain the beacon of intelligence and thought.”

How to Prevent it

Recognizing plagiarism isn’t easy. Professors and other academics have tons of knowledge about literature that they can tap into to identify plagiarism. Students often have to use citations and other resources in their work, and that is completely normal.

However, that can often lead to plagiarising unintentionally. That’s why you need to learn how to avoid plagiarism in academic writing by understanding what you can and can’t do and following the rules. On top of that, it’s always a good idea to use a plagiarism-checker tool just to make sure.

Try out Online Plagiarism Checker to detect any plagiarism in your work, and you won’t get into trouble.