This article will tell you a bit more about how different cultural backgrounds can affect the accepted attitudes and approaches towards plagiarism. 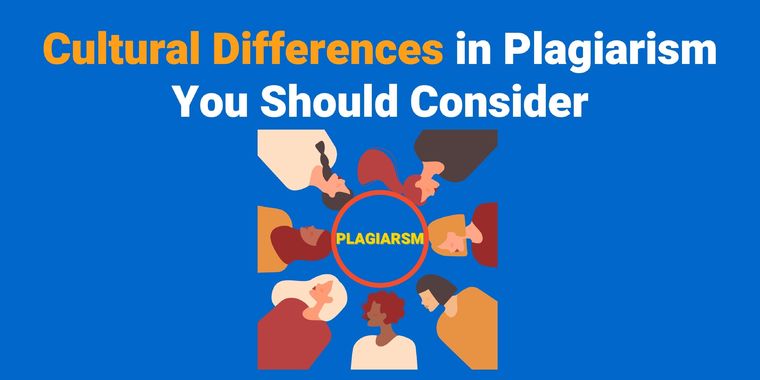 With frequent student exchanges and international studying programs, individuals now have an opportunity to experience learning and evolving in a completely different culture to what they’re used to. However, most student obligations involve writing essays and research papers where they need to use various sources. Different cultures have different customs about which texts students can use, what the text borrowing should look like, and where the writer should place the authors’ names. That leads to many cultural differences in plagiarism.

We will now dive deeper into academic integrity and how cultures view plagiarism. Keep reading to find out more!

Academic Integrity in the US

Academic integrity and plagiarism are taken very seriously in the US. Plagiarism is a situation where an individual uses someone else’s ideas and words as their own or without proper citation.

Education in the US

Education in the US strongly relies on educational integrity and nourishes the importance of giving original authors proper attribution. Scholars who follow this ideology and comply with the rules of citation are also highly valued and respected by others.

Children who start their elementary education in the US are already familiar with the concept of plagiarism. They learn how to create the “Works Cited” page and properly ascribe facts, ideas, and quotes to original authors as a way of plagiarism prevention.

Later on, in college education, undergraduates must master the craft of citation as they’re required to cite their projects and research papers.

The process of educating young American learners about plagiarism improves continually as more and more schoolchildren become aware of the importance of attributing credit to original authors.

Even though Americans know the basics concerning plagiarism, not all pupils in the US are their natives. Developed and prestigious schools and universities across the US accept entrance applications from all parts of the world, which creates a diverse student community.

Because academic integrity policies are unique to every culture and aren’t universal, individuals from different places struggle to understand the American concept of plagiarism which is often unfamiliar to them.

Many scholars don’t understand how citing works or why providing flawless citations is such a big deal. Most of them simply end up copying large parts of the text without any rephrasing. Thus, the sole idea of explaining and understanding the concept of plagiarism frustrates plenty of administrators, teachers, and international students.

As a result, foreigners temporarily or permanently studying in the US face numerous disciplinary actions due to their poor citing skills. Failing grades and suspension are just some of the actions taken against submitting plagiarized content.

Effective communication regarding plagiarism is based on examining the cultural differences between the US and native countries of pupils. Educators can achieve remarkable results through patience, understanding, compassion, effort, and cooperation.

Understanding the Concept of Plagiarism in Different Countries

Although globalization affects all parts of the world, some standards can’t be altered as they’re deeply rooted in the nation’s culture. Each country approaches the notion of plagiarism differently, while some countries don’t even acknowledge its existence.

Now that we have explained plagiarism in the US, here’s a brief guide on how different countries view plagiarism.

In the UAE, Saudi Arabia, Qatar, Kuwait, Cyprus, and other countries in the Middle East, traditional cultures have quite different views on plagiarism when compared to the US.

Individuals are expected to know where specific phrases and ideas come from, especially if they attend higher education. Quoting and paraphrasing the best-known religious or political authorities is common in all fields, without attribution to the original authors. Scholars and teachers are expected to know where the texts come from, so the attribution is unnecessary.

Formally citing these sources would mean the student didn’t know the ideas belong to common knowledge, which can seriously insult teachers and harm the student’s future in education.

Student writers must learn what information they should know by heart and what their teachers consider as common knowledge that they shouldn’t have to cite. That isn’t a simple task but, with enough academic maturity and experience, individuals learn to distinguish common knowledge from the uncommon.

A similar way of thinking is evident in other Asian countries, including China, Japan, and South Korea. As collective societies, knowledge in these countries is viewed as belonging to the entire society and not the individual. The teachings of Confucius provide a philosophical foundation for this way of thinking, as the ownership, or better said, non-ownership of ideas, is among the basic concepts.

Children are taught to avoid challenging authority and respect those who provide knowledge from their earliest ages. Therefore, it’s not surprising to hear that pupils are expected to memorize and repeat important texts that hold significant value in their culture. Memorization is part of all school subjects, including Science, Maths, Geography, History, and Literature, because it’s believed that the masters have already found the best solutions in every field.

Changing the texts, paraphrasing, and creating original ideas isn’t encouraged, as it would mean the student doesn’t respect the teachings of masters. On the other hand, memorizing the important texts and teachings shows respect and time invested in education.

As a result, Asians studying in the US or any other Western country often copy entire texts and keep them in their original form since they believe the text is written better and expresses the idea better than they could do so by themselves. That is a result of their previous education, which strongly relies on mimicry and memorization of original texts, and their inability to explain complex ideas using a language they’re not proficient in.

Eastern Europe stands in the middle between Western Europe and Asia, not only geographically but also when it comes to attitudes towards plagiarism too. Even though these countries formally follow strict rules and guidelines of proper citation, individuals from these countries are much more forgiving of academic misconduct.

That also goes for Eastern European countries that are EU members, including Bulgaria, Romania, Croatia, and Poland. Both pupils and teachers of these countries don’t take academic morality too seriously, nor do they report when someone fails to deliver correct citations.

While scholars are aware of plagiarism and its features, none of them take it too seriously or go the extra mile to prevent such behavior unless it is a major publication.

Latin America is similar to Eastern Europe in this regard. Schools and universities don’t frequently discuss the notions of academic misconduct, such as plagiarism.

However, as universities become bigger and diversify their campuses, both across Latin America and abroad, educational institutions in Latin America are pressed to address cultural differences in plagiarism.

As undergraduates enroll from various cultures and countries, showing empathy for individual views and approaches towards academic integrity is crucial for all teachers across Latin America.

Some cultures don’t even comprehend what plagiarism is about, as there’s no formalized understanding of it. For example, in Eritrea, legal copyright protection simply doesn’t exist. Works written by authors within their country or foreign authors have no protection against plagiarism whatsoever.

The citizens of this country are free to use whatever they like and however they want, which could be tricky if an Eritrean student arrives in the US or another Western country to study. Without a basic understanding of plagiarism, it’s difficult to comprehend and follow the US concept of academic integrity.

Not all countries in the world are different from the US. In fact, most developed countries follow the US example of academic integrity. Canada, Australia, and Western Europe included. Like other countries where individualism predominates collectivism, Western European countries follow strict rules and guidelines intended for plagiarism prevention.

Each educational center or other institution that works with texts and writings has a tool that checks the authenticity of the content. Failing to cite the sources, or citing them incorrectly, can lead to minor and major academic consequences. That is deeply embedded into the educational system of Western European countries.

Many foreigners who come to developed countries to complete their studies struggle to understand the key concepts of plagiarism. They don’t understand why it’s considered immoral in Western cultures because they don’t see it as stealing or cheating since it’s probably accepted in their home countries.

Whether an individual is studying or teaching, it’s crucial to approach academic integrity as a  concept closely connected to the country’s culture. Cultural differences in plagiarism certainly exist, and they’re numerous.

By approaching the teaching of educational integrity with compassion and empathy, scholars and educators can better understand where the other person’s opinion is coming from. Today, it’s possible to find a middle ground and teach integrity without demeaning or dismissing participants’ cultural backgrounds.

Only through cherishing our similarities and differences can we create an egalitarian attitude towards learning.